This is a post about open source, don’t grumble, that’s my job.

What’s it got to do with open source? Well, littlesvr.ca is the channel for my open source work to get from my desktop to the users. It’s an emal server, a web server, an FTP/Telnet/SSH server, a Subversion server, a mailing list server, and probably some other things I can’t remember now.

It used to be a PII and it performed brilliantly. But now I got a new one from Koolu. It’s not crap cheap (about 400 CAD with taxes and shipping) but I think it’s worth the money. Here’s the old littlesvr.ca on the left and the new one on the right: 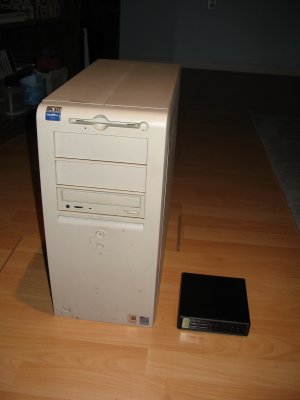 A couple of close-ups: 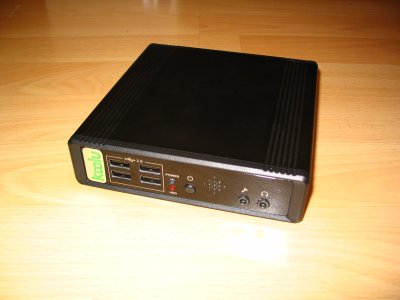 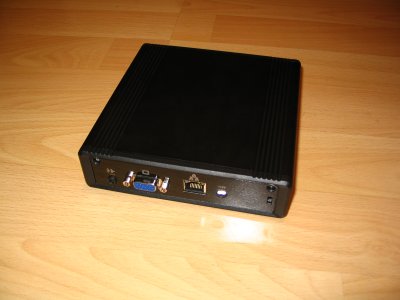 Compared to other ‘mini’ PCs it’s a winner. It’s an actual PC. The only one I could find with no fans and with a hard drive.

There are some huge advantages to these little guys as compared to a ‘normal’ computer:

And there’s a bonus (if you care about such things) the company that makes it is based in the south of Ontario (not far from Toronto).
So, back to open source: it’s running Slackware (but any other Linux distro would do) and if you’re the kind of person who would like their own servers, it’s a bargain. Skills for the setup depend on what you want. SSH works out of the box, telnet and FTP are trivial to set up, SVN is easy, Apache is harder, MySQL is harder still, and don’t even bother with the mail server unless you’re really hardcore. Get an old PC that’s sitting unused and try to set it up.

And I have to complain about something: why is it that it took me 3 years to find this box? Why do people want to have a quad-core 64-bit monster to serve 1 HTTP request per minute? It’s everyone else’s fault that I was wasting electrical energy just because I wanted to control my data.

Previous: Animations on the web
Next: Of the 1337 programmers and their fanboys
Close Widgets