Once a year or two ago they were lending out power meters at the Richmond Hill library, the sort of thing that you put in between an electrical device and the power plug in the wall to see how much power the device uses. Trying to find it again.. PowerStream’s Watt Reader Loan Program, could be that you can still borrow one at the library.

I’ve measured just about everything in the house where I lived at that time (here’s the spreadsheet) and some things were just stupid, like my speaker system that would suck up half of it’s maximum power even when powered off.

That project was left on hold for a while, until recently when I started paying my own bills and was wondering how much of the idle computer stuff I have is costing. I have a large desk with two desktops and one or two laptops, a laser printer, some external harddrives, speakers, and random other things. Instead of measuring them all separately I plugged them all into one power bar (I’m oversimplifying of course), had that power bar sit on the desk, and turned it off when I was done with my computers for a while.

Some things like the DSL modem and Wireless Router were not powered through this circuit, and would continue to stay on 24×7.

It may have been a coincidence but it’s been 3 months now and my electric bill has gone down by 10$. I’m pretty sure I haven’t done anything else, though I don’t really understand how air conditioning works in a condo, that may have used some power the few times we turned it on.

The system is not that complicated. Just look under your computer desk at home and you’re likely to find over ten things plugged in all the time. Most of these are using power even when you’re not doing anything with them, and all together using a good hundred watts. You leave all that plugged in and it’s the same as having a big room lit non-stop. It’s a shame and a damned waste of time.

It’s kind of fun too, though maybe that’s just me, I guess not everyone will build a power bar like I have, but if it’s not fun just think of the bragging rights you’ll get and the 120$/year you’ll save :) 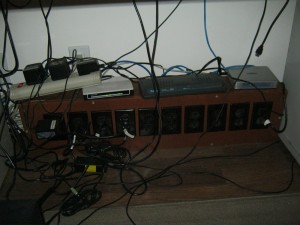