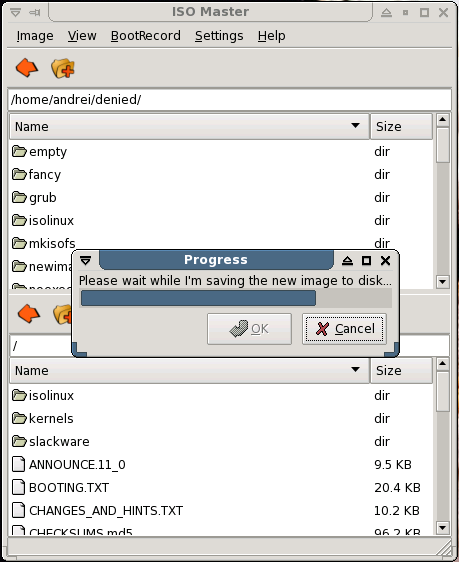 Well, there’s nothing seriously wrong with that screenshot – I’m talking about the picture of me working on a reasonably popular open source app for Linux (ISO Master). What’s wrong with writing open source apps for Linux? Nothing, unless you need to make money to pay your bills :)

Linux users are so used to getting applications like this for free that they’ll never even consider paying for it. I thought of supporting open source by paying for it once but then I realised I use a couple of dozen programs regularily and there’s no way I can pay for them all so I just payed for the distribution I use (distribution being the entire collection of software).

I sometimes get requests for a Windows port of ISO Master. After discussing it with a few people I have a plan in mind:

Hopefully there are enough users alltogether that there’d be enough of them willing to pay that I’ll recover the expense of making the Windows port. A shot-in-the-dark estimate for how long it will take me to finish it is 3 months part time, so if I make a few thousand dollars that will pay for my time, and anything more will be profit.

One concern I had is that, ISO Master being open source, anyone can take my source code, get rid of the nag screen, and release a rebranded copy. After thinking about it I decided it’s highly unlikely. Since the program is free already it’s pretty hard to compete with, so anyone attempting it will fail.

Another concern is that my competitors may steal my code and use it in their programs. Though technically this is illegal (the GPL licence I use doesn’t allow it) I would never catch them myself, so they may be able to get away with it. But then I decided my competitors’ programs can already do everything ISO Master does, so my competitors won’t get an advantage.

There are some advantages to free software. The biggest one being free promotion. When someone wants to recommend a solution for fixing an ISO, the free program will be at the top of the ‘recommended’ list, since it doesn’t require payment or looking for a crack. Also there’s half a million directories of shareware/freeware out there that will happily list ISO Master.

In the end – this is a small business venture, and (as it is with all startups) I have to put up with the possibillity that I won’t get a return on my investment. In the worst case I will have lost some of my time, and I can live with that risk.

I would like some comments and criticism about this idea, there may be problems and solutions I didn’t think of.

If it works – Barb and Mary will be proud (ISO Master started as a systems project at Seneca).

Previous: More on fanboys
Next: How evil I have become
Close Widgets